The architects and interior designers of blocher partners, Stuttgart, have succeeded in breathing new life into an aging city hall and adapting it to contemporary and future needs with the complex renovation and expansion of the Kathrin-Türks-Halle in Dinslaken.

It is an identity-defining building for the city, albeit one that is getting on in years. The structure is not up to today's standards, but its use is still as important as ever: Named after the first director of the Burghofbühne, the Kathrin-Türks-Halle has been one of the city's identity-forming buildings in the northwest of the Ruhr region since it was built in the 1970s. As a striking solitary building, it rises in the immediate vicinity of the historic city hall. Equipped with a theater stage with 17 proscenium trains, it has functioned throughout its life as a guest theater as well as a venue for various festivities or leisure activities. After the successful VGV procedure in 2015, the architects and interior designers of blocher partners completely renovated and expanded the hall, brought it up to date technically and also in terms of fire protection, and made it barrier-free accessible.

The task was a revitalization that honors the spatial qualities of the existing building while rethinking its functionality and making it visible from the outside. The idea was to create two design brackets with a metal curtain wall, which on the one hand contain the volume of the solitaire, and on the other hand expand the hall to include additional multifunctional rooms, so that up to three events can now be held simultaneously. A crack in the façade creates the impression that the building is leaning towards the town hall opposite. It almost seems as if they are entering into a dialogue with each other. The vertical, reddish-brown slats of the façade take up the small-scale nature as well as the color scheme of the urban context.

The connecting element of the slats can also be found elsewhere: as the cladding of the stage tower, they crystallize the heart of the hall. The significance is emphasized by the dark color scheme, which contrasts with the reddish shimmer of the brackets. 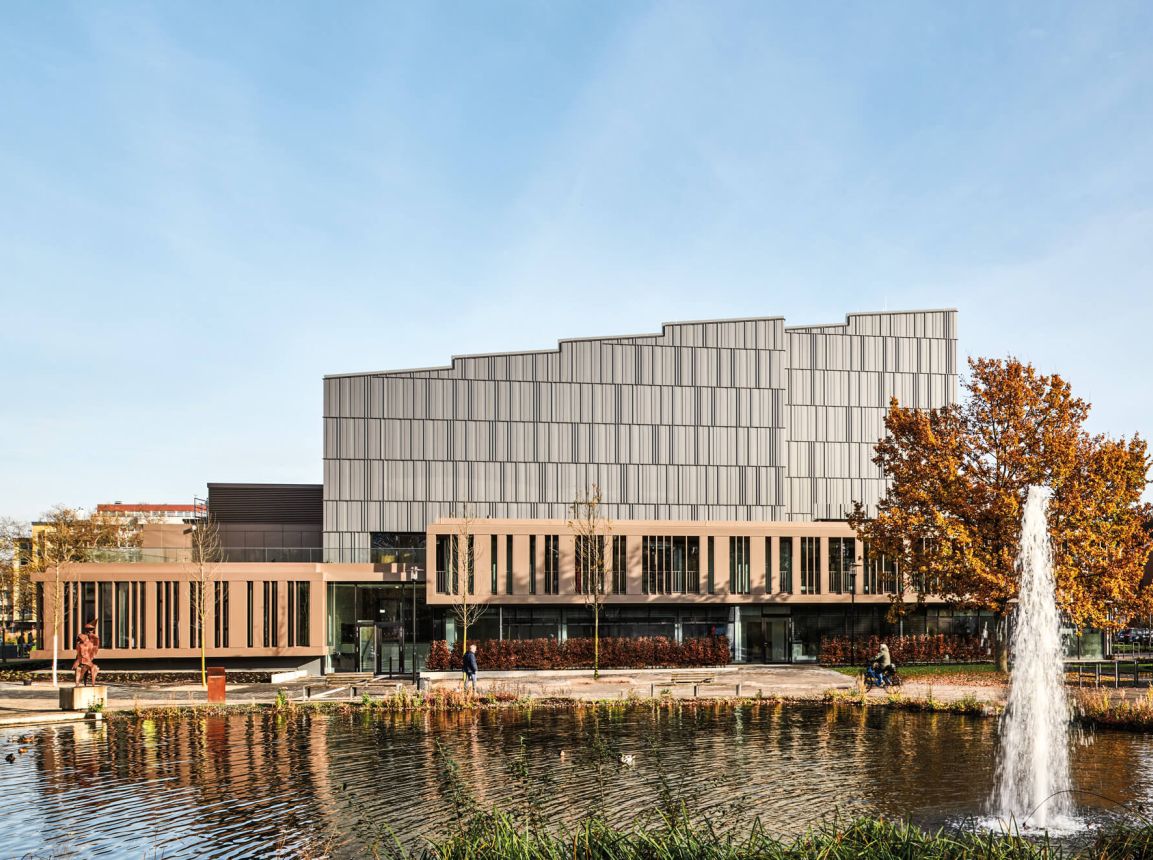 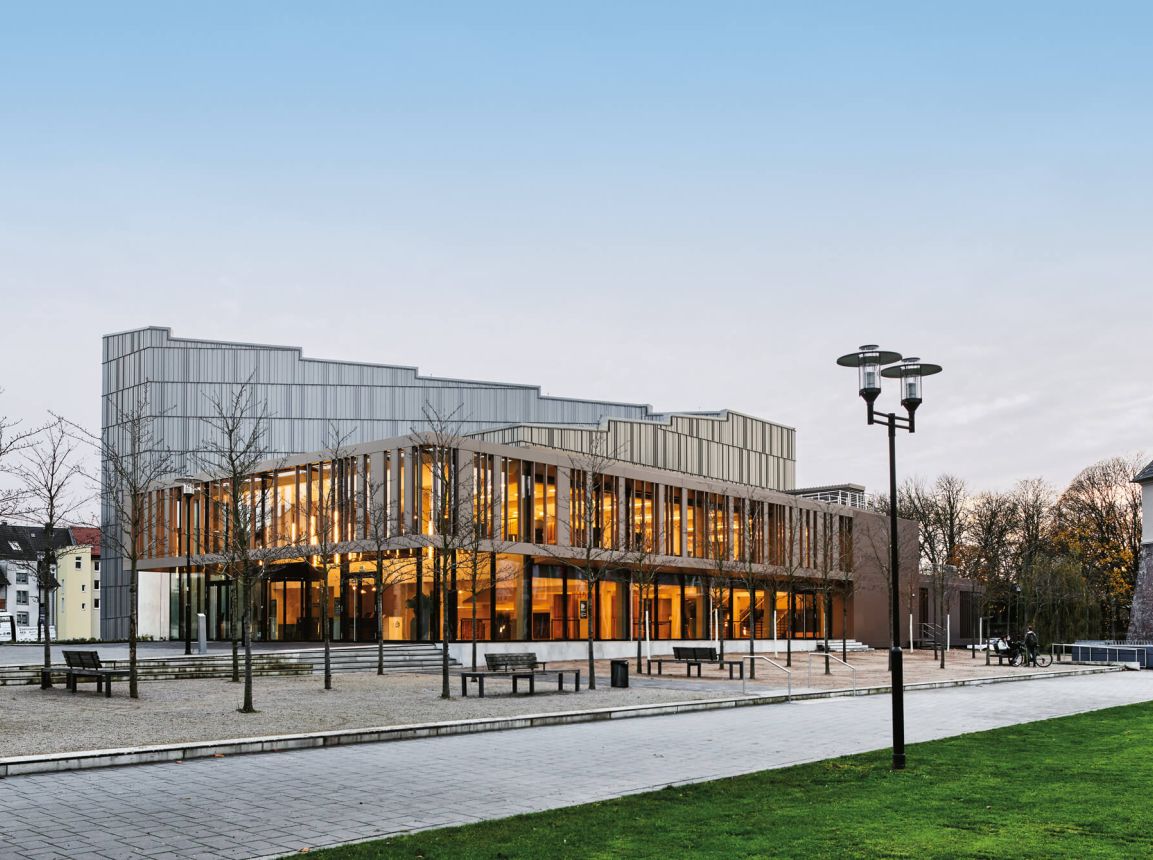 A hall for all

Fully glazed and two-story high, the new entrance hall also makes an impression. Its openness conveys transparency and invites people in. It thus underscores the function of a city hall to be a place for all citizens. With a clever trick, the architects managed to continue the generosity inside: They have integrated the infrastructure and sanitary facilities in the foyer in the basement with ground-level access to the underground parking garage, and all areas are accessible without barriers.

The interior designers also succeeded in making the stage tower perceptible on all levels. If the building already stands out clearly from the outside, it becomes visible on the inside: through connection details, material, color and feel, the building core has been carved out and two spatial worlds have been created. The dramaturgical arrangement of the wooden slats is reminiscent of a grain field in the wind, the surfaces appear calm and at the same time full of tension. The changing arrangement also creates excellent room acoustics. The interior designers also succeeded in integrating the technology inconspicuously into the wall and ceiling surfaces.

Already on the entrance level, the theater hall unfolds the new spatial freedom: a stepped floor traces its silhouette there. This effect is in turn reinforced by the use of slats: made of local oak, they clad the walls and visually connect inside and outside as well as the levels within the hall. The slats extend from the entrance up to the stage tower, where the harmonious interplay of architects and interior designers reaches its climax in a certain way: The light, warm oak wood dresses the walls of the theater hall and contrasts beautifully with the theater stage and hall ceiling, which have also been redesigned and are entirely in black.

Because the designers were far from denying the building's past, the exposed concrete surfaces of the existing building have remained largely unchanged as a reminder of the period in which it was built. The stairs have also been preserved, with only the steps receiving a new coating. Small, careful interventions make the original charm of the hall perceptible and allow the materials to tell the story of the place. The result is a hall that radiates a formal clarity and at the same time is attractive due to its diverse The result is a hall that radiates formal clarity, while at the same time living up to its significance for the citizens of Dinslaken and beyond thanks to its diverse functionality, flexibility and attractive appearance. 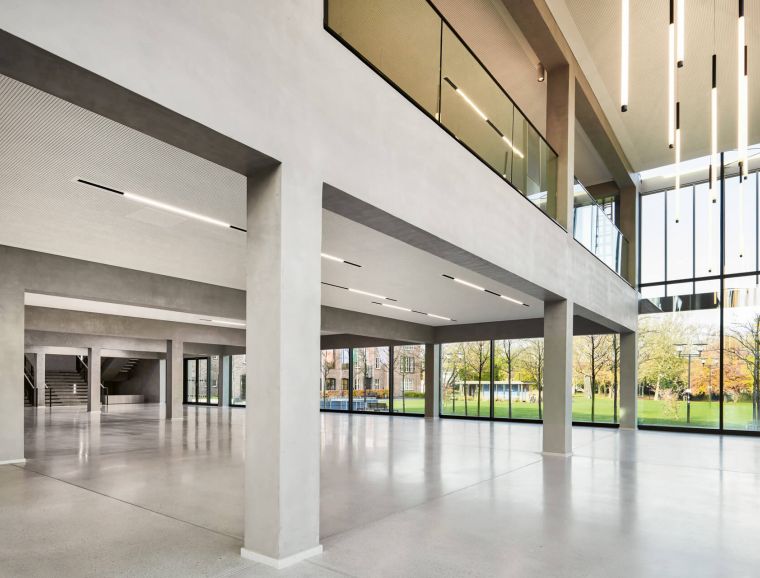 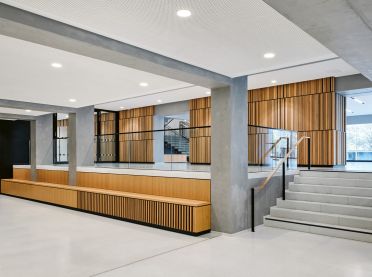 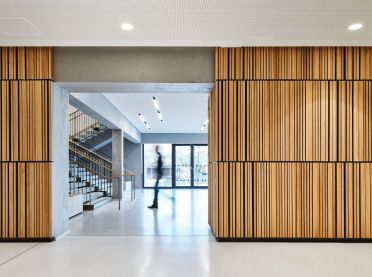 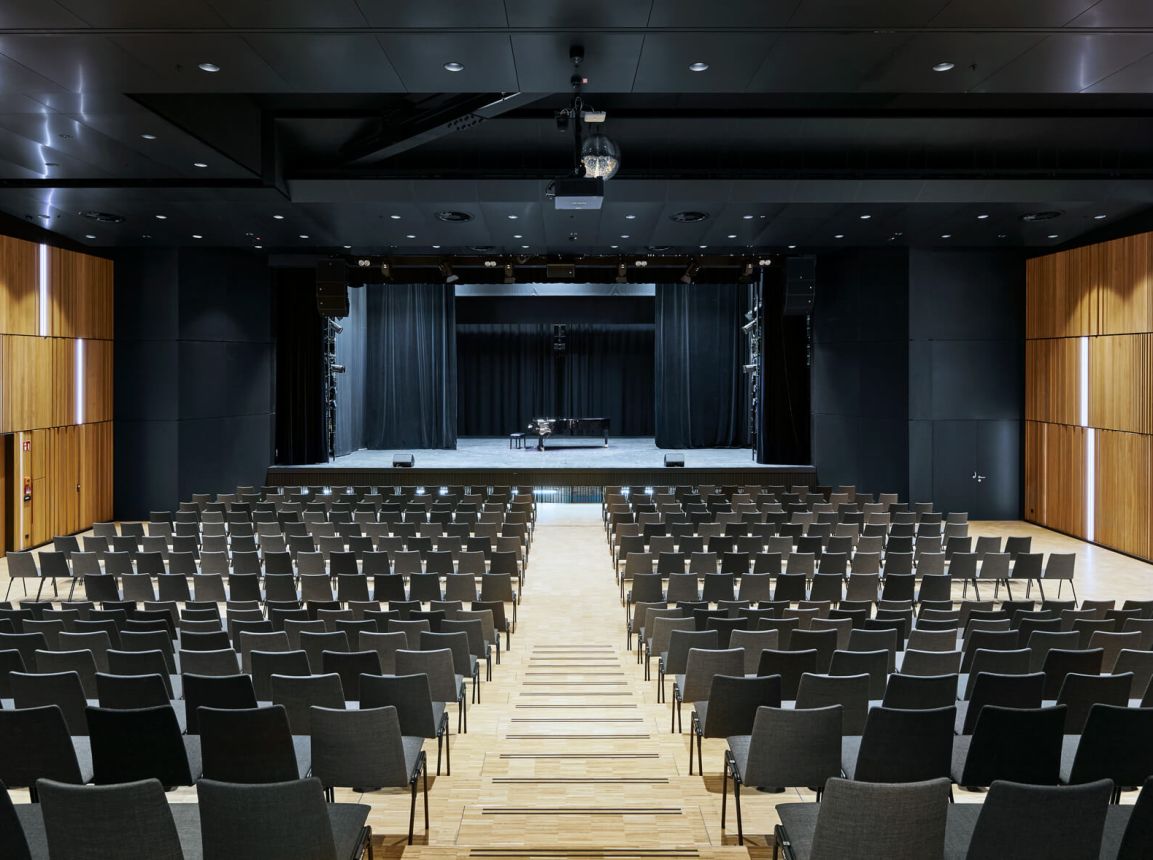 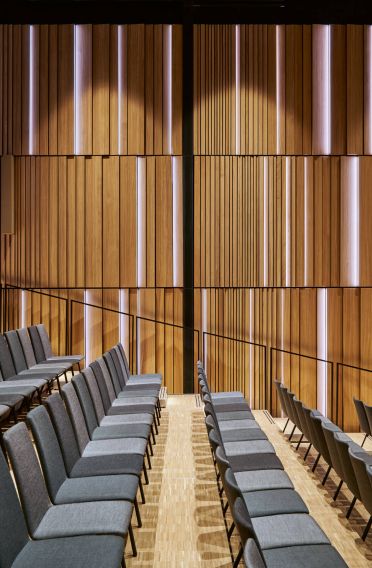 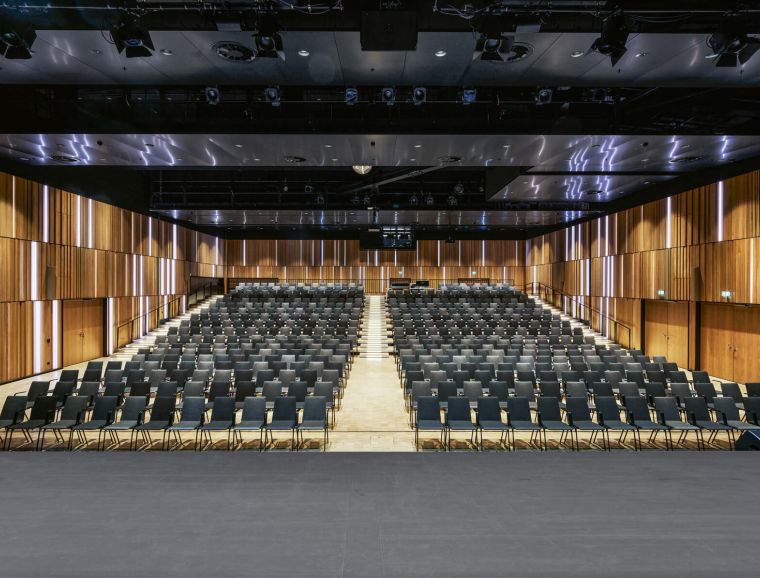 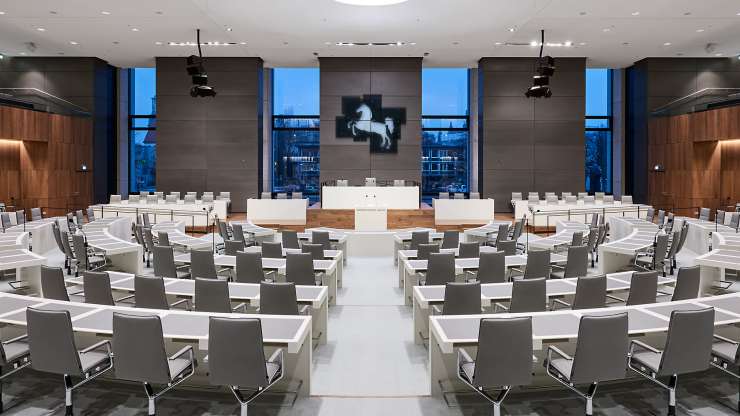 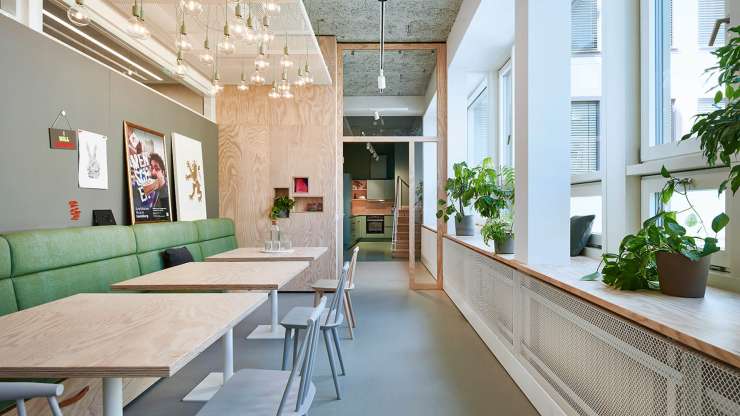 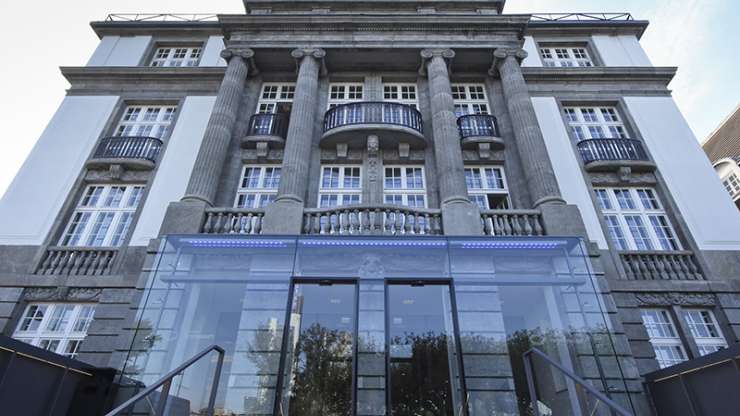 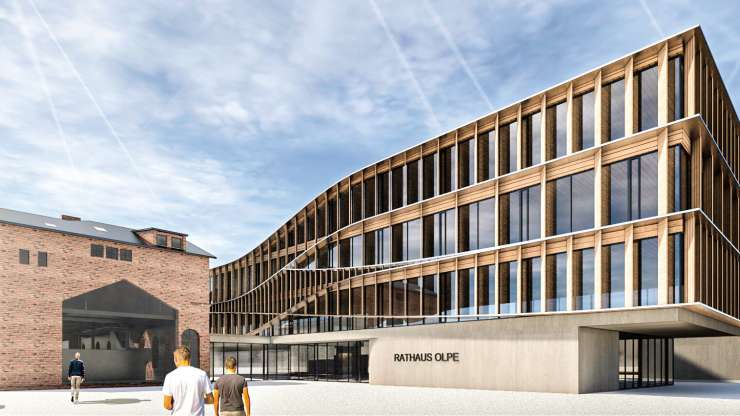 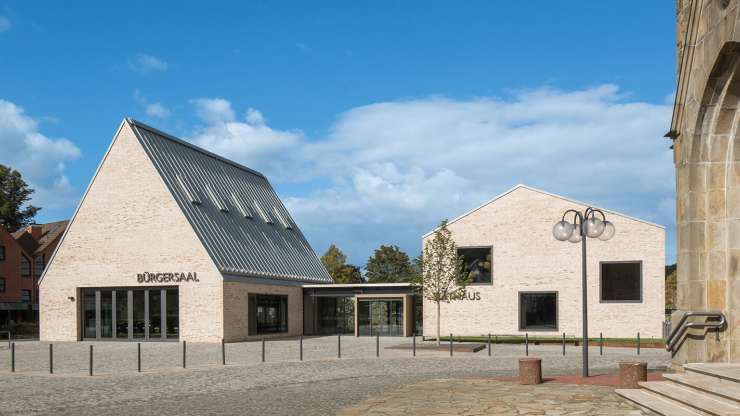 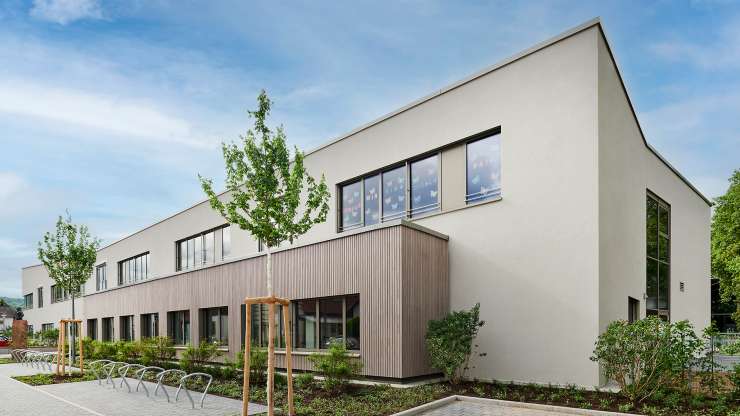 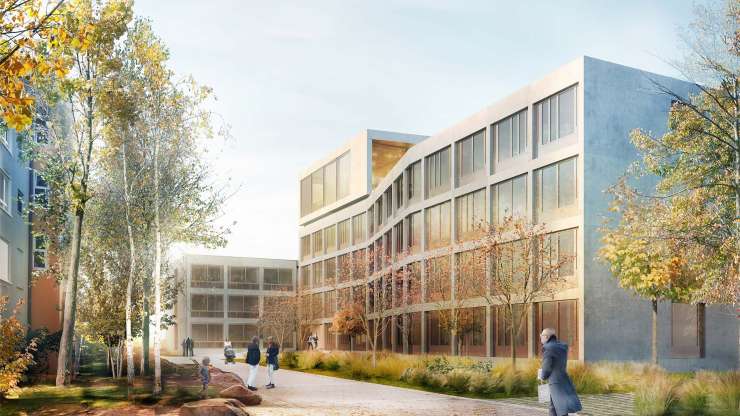 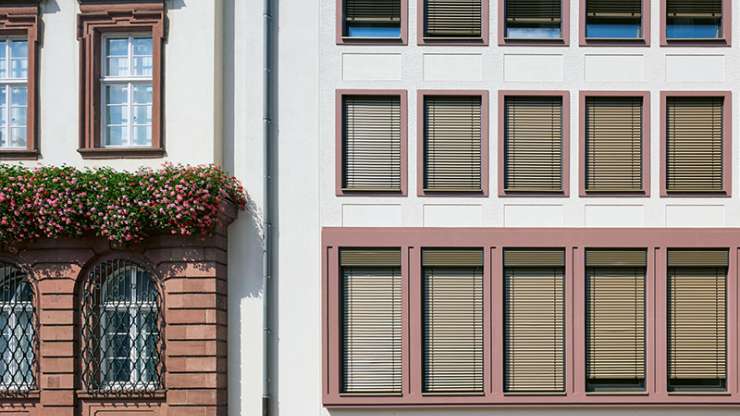 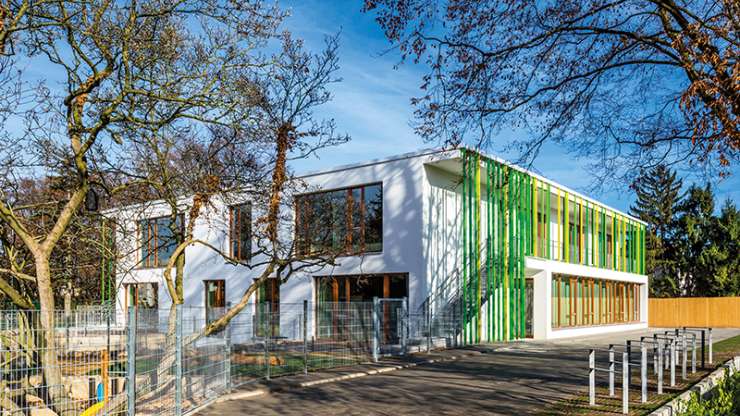