But the planners of the Stuttgart-based architects and interior designers, blocher partners, were confronted initially with a challenge. The elongated floor plan of the approximate 17,000 square metre sales floor showed a sharp bend in the middle. As a result of this, two axes are formed, which moreover are accessed by several entrances. The interior designers' answer to this is as pragmatic as it is innovative. They simply uplifted the duality into a design principle. Two axes, therefore two divisions – on all four floors. Joined with each other at the connection points by ceiling strips as orientation points. Another challenge: the large number of third-party brands that occur on the area with their own branding. They are incorporated in a higher-level design which simultaneously provides the design intermezzi with enough room for play. Thus, Central as the house brand is visible at any time. The 2x2 principle begins on the ground floor with a vis-à-vis of the cosmetic and women's designer departments. Two premium worlds, joined by luxurious shades of gold. In the designer department, the brand highlights are enclosed by a wire-mesh structure interwoven with elaborate floral patterns. In this way, a kind of house-in-house is created; a principle that is repeated on all storeys. Of course in stylish variations. 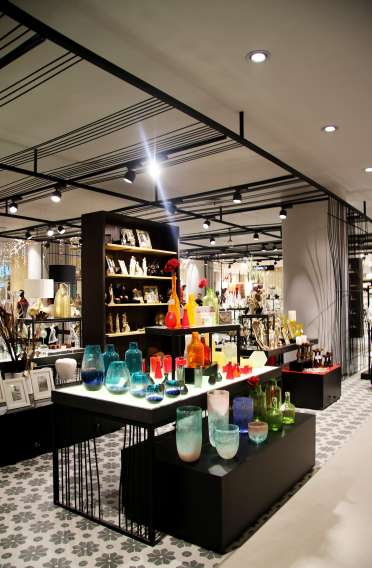 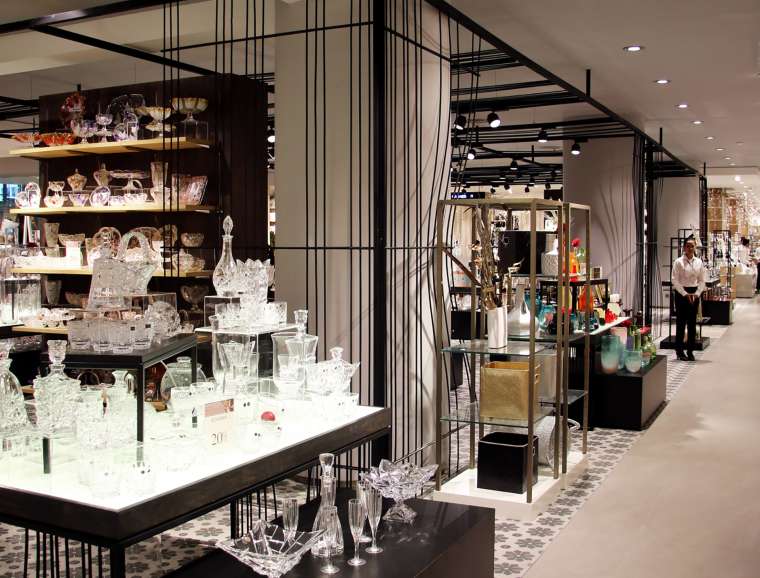 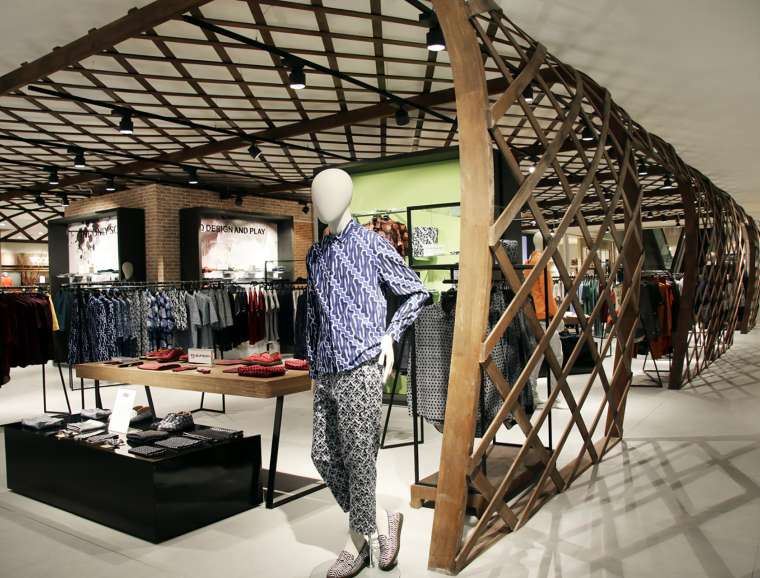 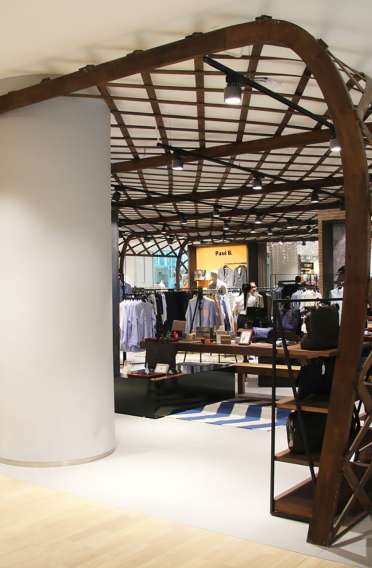 In the women's fashion world on the first floor, an ornamental metal construction forms the setting for the Who-is-Who of the Southeast Asian designer scene. The leitmotif of the surrounding sales floor: a modern interpretation of cassette walls, conveying timeless elegance and a contemporary sense of class. At times, in the classic look of dark turquoise, sometimes entirely in a modern mosaic style.

Here, too, slatted panels on the ceiling indicate the transition to the next department, the shoe and bag division. An eye-catcher: polygonal ceiling elements continuing seamlessly on the rear walls. Harmonising with the polygonal, high-gloss white furniture and pedestals, which flatter the premium merchandise with their sculpture-like appearance. On the second floor, the jeans/unisex and men's department meet each other – two young, rugged looks. Tiles, raw wood, wall paper and dark expanded metal in the jeans division blending with fishbone parquet and wooden ceiling slats in the central men's casual area. In the adjoining men's business department, concrete walls alternate with metal curtains. Here, the house-in-house is designed as a gently curving diamond-shaped structure in wood, revealing at the core changing rooms, clad with clinker bricks. Things get really colourful in the children's department on the 3rd floor. With yellow walls, colourful glass elements set into sloping furniture, butterfly appliqués and abstract animals. As a contrast, the home division presents itself as deliberately reserved – with an interplay of light and dark accents. 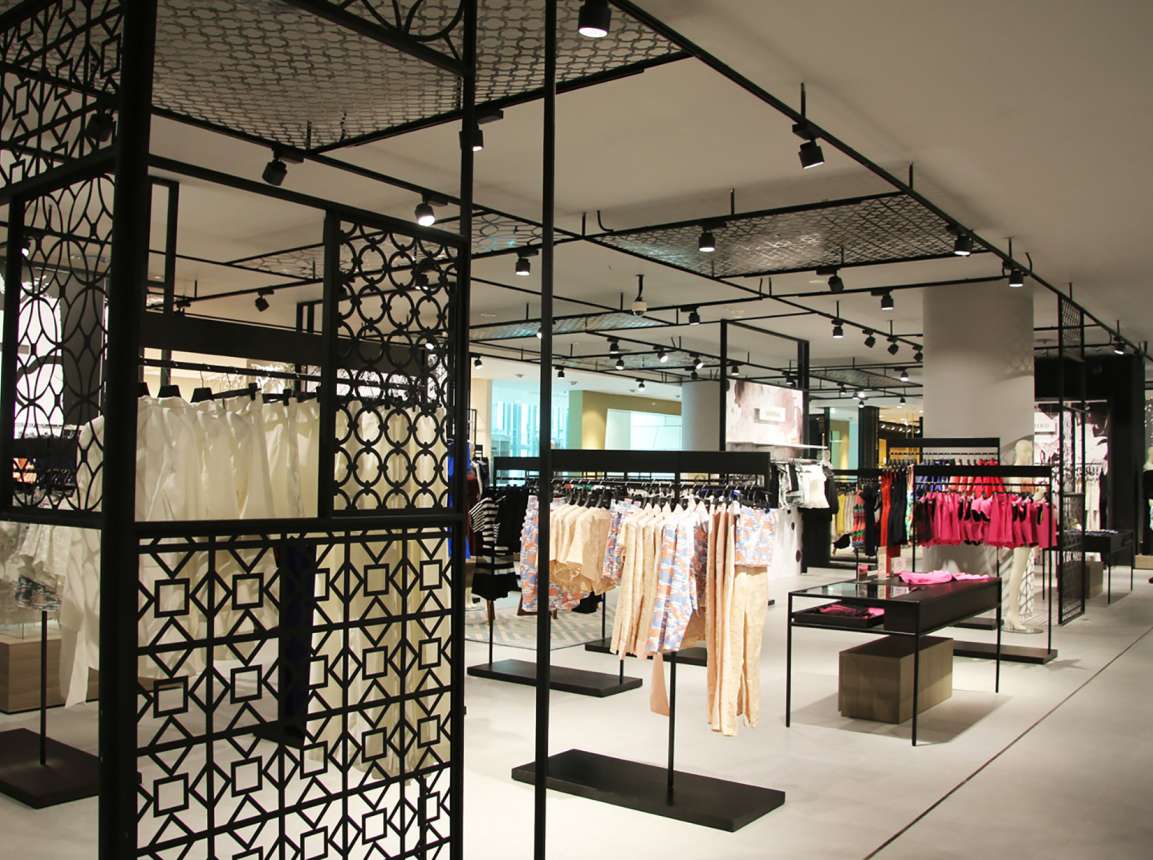 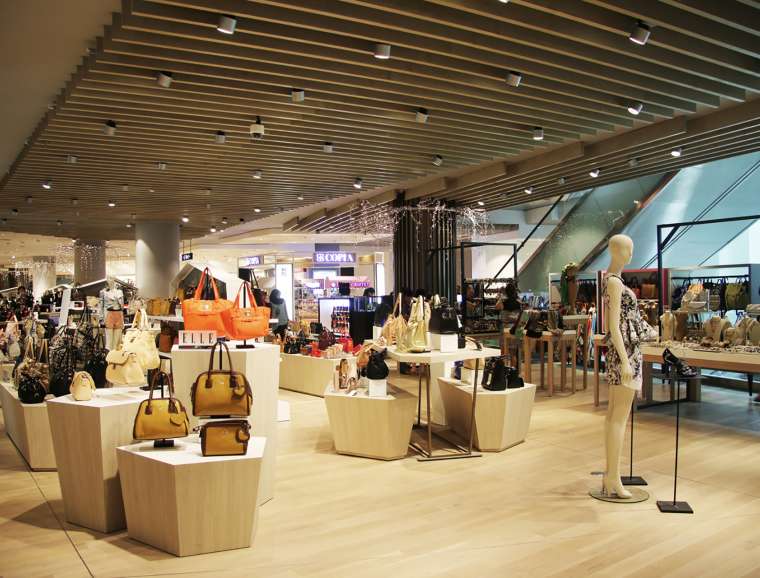 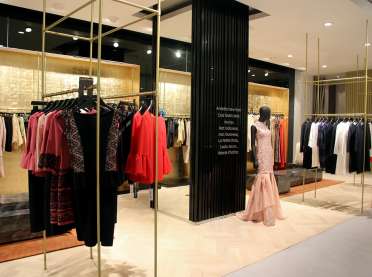 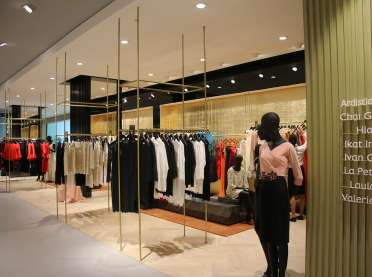 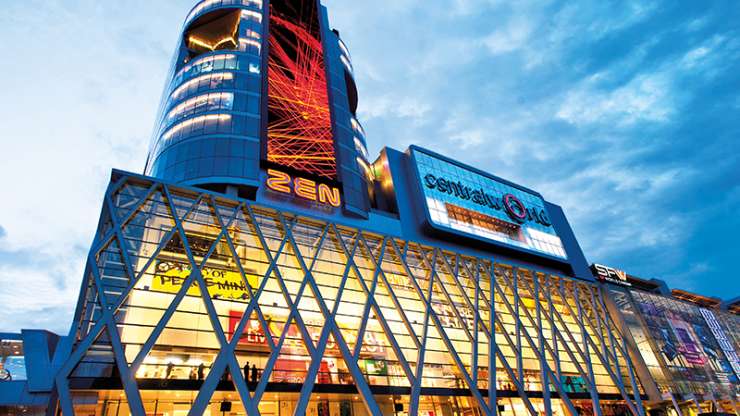 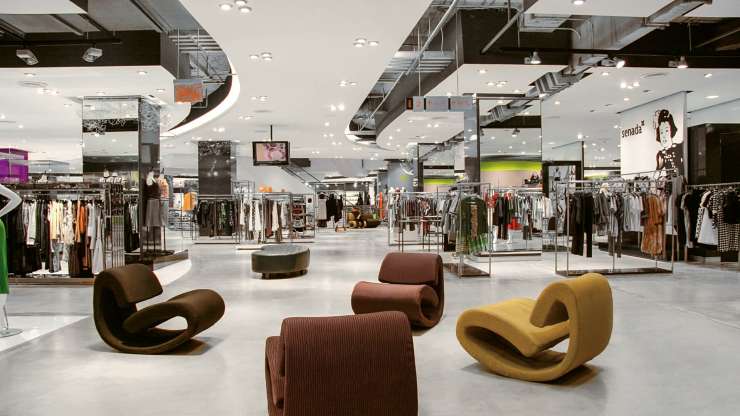 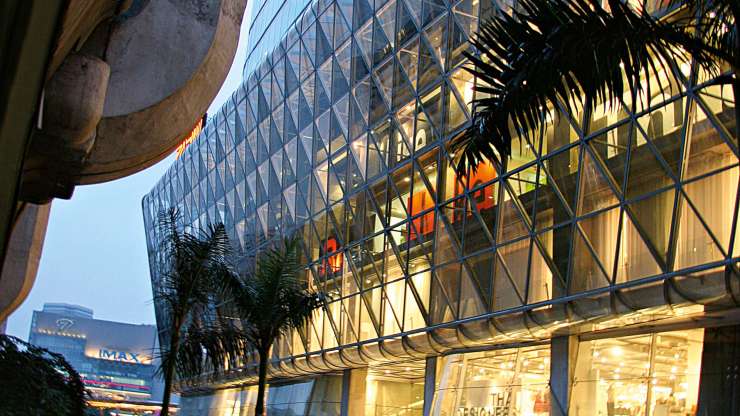 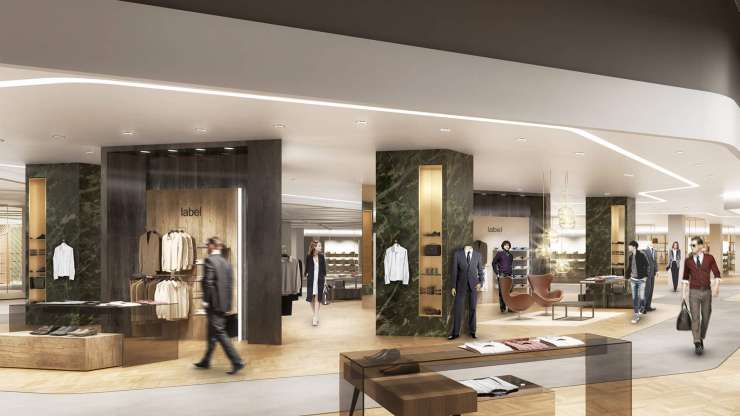 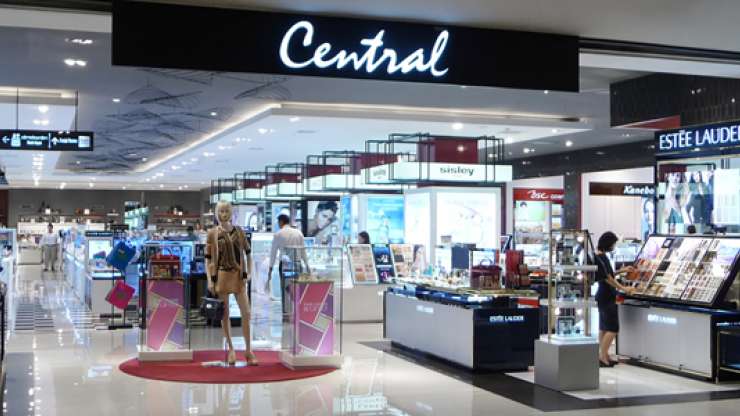 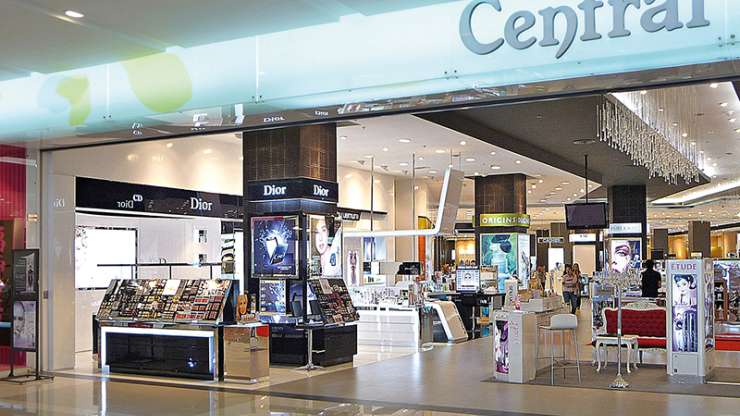 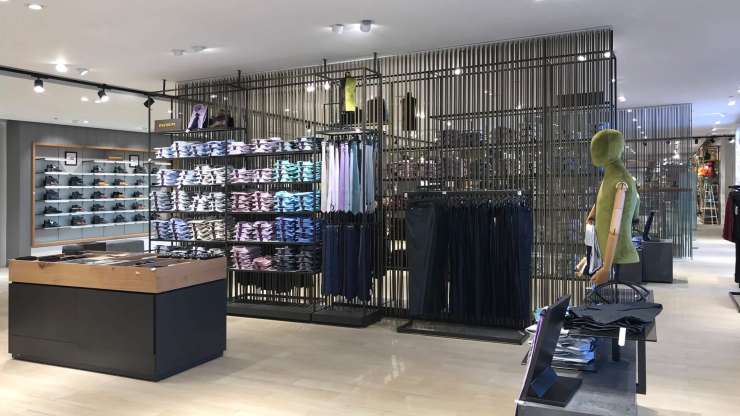 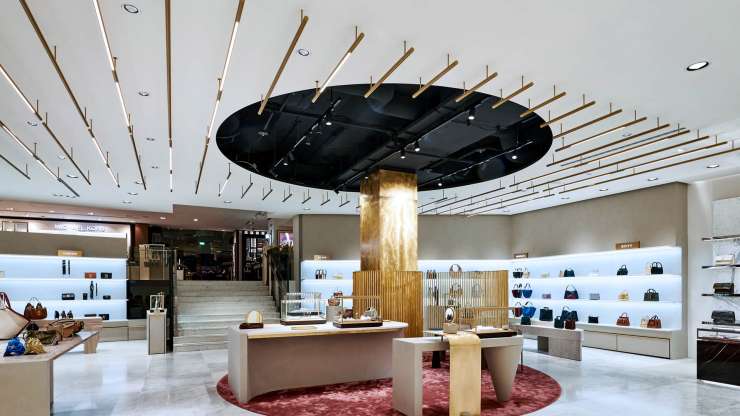 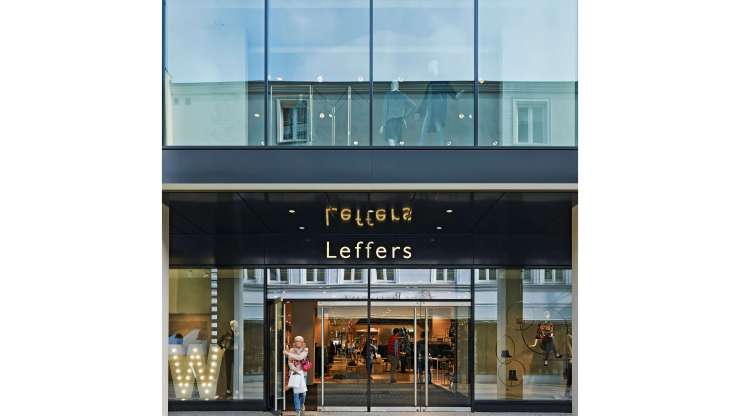 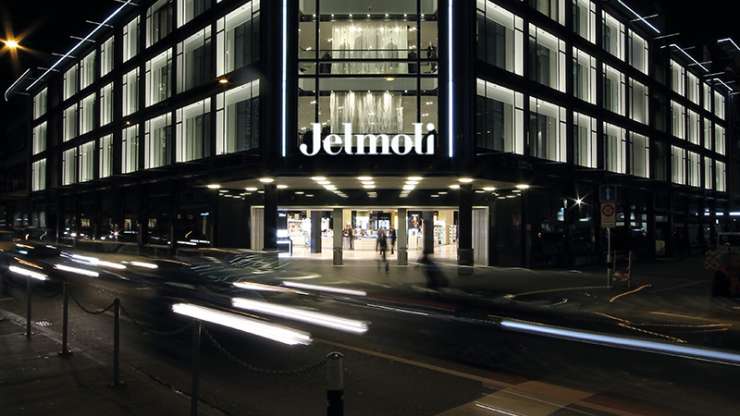 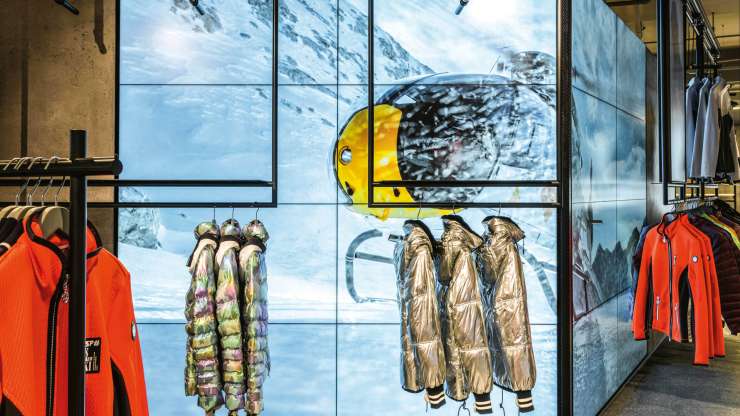 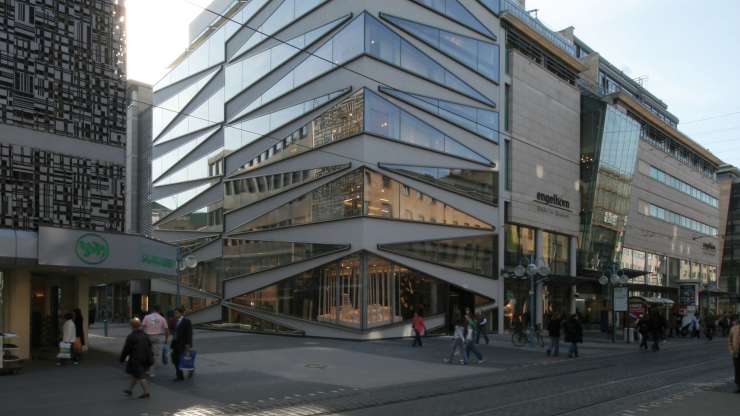 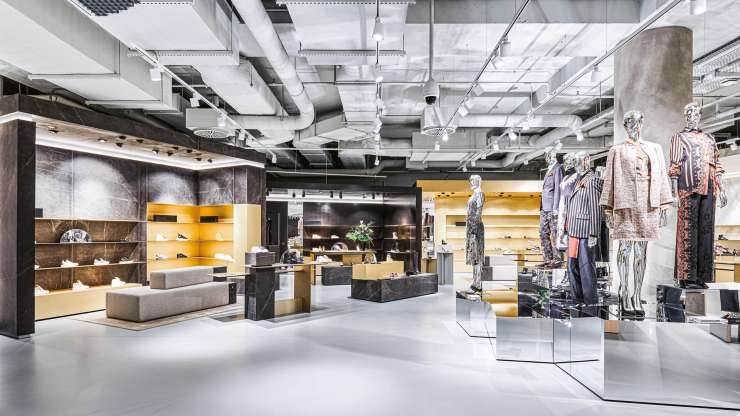